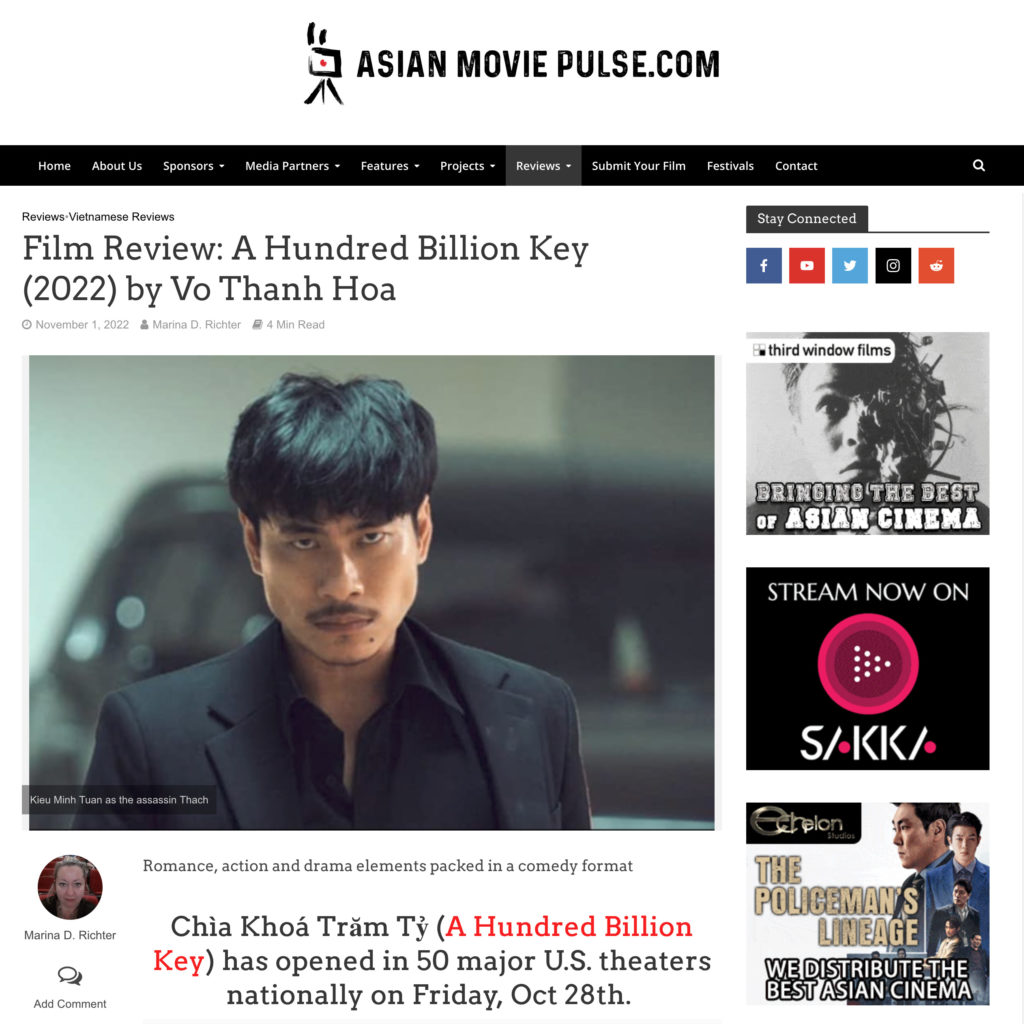 Romance, action and drama elements packed in a comedy format.

Poppy tunes open Vo Thanh Hoa’s screen adaptation of Kenji Uchida’s “Key of Life” (2012), following the first action scene that introduces one of the film’s three key characters – Thach (Kieu Minh Tuan), a notorious assasin who’s seen completing his task and then disappearing from the crime scene. In just a couple of minutes he will shake of a bunch of armed criminals by swiftly changing roles from one type of servant to the other, to be ridiculously defeated by a simple bar of soap. Just like in Kenji’s original, the fantom assasin gets knocked unconscious in a bath house, and wakes up with amnesia and a wrong locker key in his hand, logically believing to be someone else.

Thach starts living the life of Cao Chi Dung (Anh Tu), a failed actor with money problems who stole his locker key, and it’s all about a very straight forward, no surprises process of adaptation to new circumstances. This type of story has been warmed, and chewed up countless times before, and almost uniquely in the comedy language. Speaking of which, despite of not being original on many levels, “A Hundred Billion Key” is an entertaining watch with a lot of audience-pleasing jokes and action scenes. The latter prove to be one of the film’s strongest trumps, with finely choreographed mass fights that don’t become over-the-top, streched-out spectacles.

There are barely any changes in the plotline of this adaptation that sticks to all major details from the original regarding the identity swap and character development, but the small alterations of the culturological nature (the local setting, the eating habits and relationship between people) work quite well, bringing the events in the film close to the Vietnamese audience.

True to the original is also the love story that builds parallelly to the main plot. The former assassin and now a movie star bonds with his ‘savior’ Mai Mai (convincingly played by Trang Thu), a woman who happened – not quite voluntarily – to drive him from the bath house to the hospital, thus becoming his contact person. No surprises are hidden here either. We are sent on the good old proven rollercoaster of friendship-true love-one backs off-reconciliation, without a grain of doubt that things would happen precisely that way. And yet again, it somehow doesn’t matter. “A Hundred Billion Key” is fun the way it is.

Kieu Minh Tuan may not be someone who we could call a character actor, but he is a good fit for the role of Thach with his raw energy, the big baby-got-lost-looks and piercing stares, and his ability to transform to a stereotypical TV action movie character with exaggerated gestures (there is a film in the film, he is a star of) and likewise – facial expressions.

There is always a question about the reasons for making a 1:1 adaptation of a success film, especially if the original lays only 10 years in the past. It has to be said that there was already a South-Korean version “Luck Key” (2016) directed by Lee Kae-byeok, which had a relatively good resonance with the cinema audience, so it can’t be a coincidence that Kenji’s script attracts other filmmakers to take on it. It has romance, action and drama elements packed in a comedy format, profitting from the light and accessible cinematic language.

There is a good production value to Vo Thanh Hoa’s interpretation of Kenji’s script & ecranisation. Behind the visual effects is Bachnn, who has already proven his know-how in multiple action and genre films such as Derek Nguyen’s “The Housemaid”, Le-Van Kiet’s “Furie” (2019), “The Requin” (2022) & “Ancestral” (2022), and also recently in Emily Hagins’s “Sorry About The Demon” (2022).