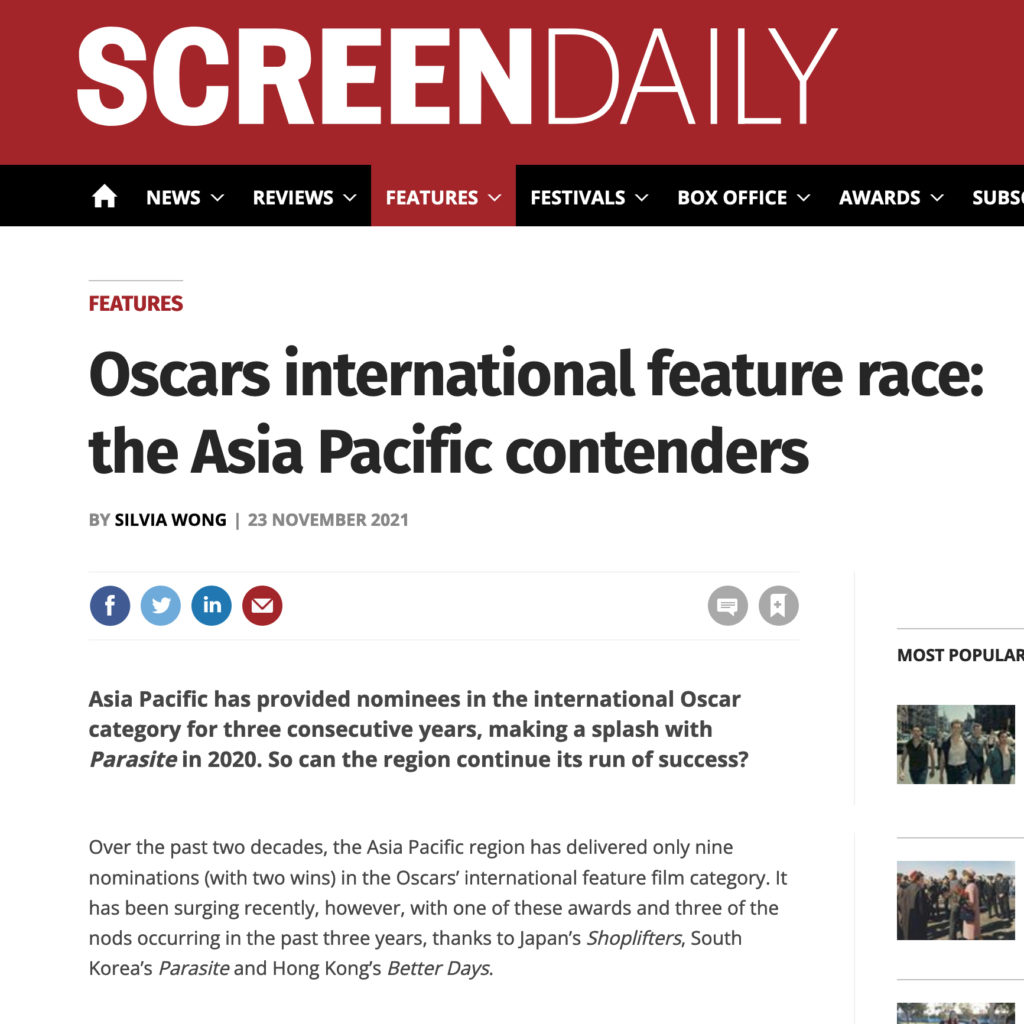 Asia Pacific has provided nominees in the international Oscar category for three consecutive years, making a splash with Parasite in 2020. So can the region continue its run of success?

Over the past two decades, the Asia Pacific region has delivered only nine nominations (with two wins) in the Oscars’ international feature film category. It has been surging recently, however, with one of these awards and three of the nods occurring in the past three years, thanks to Japan’s Shoplifters, South Korea’s Para­site and Hong Kong’s Better Days.

Looking at this year’s diverse submissions, ranging from commercial hits to festival favourites, several titles landed early on the radar of Oscar watchers even before campaigns had begun. Three awards in Cannes, including best screenplay for director Ryusuke Hamaguchi, saw Japan’s Drive My Car begin a busy festival tour of North America, taking in Toronto, New York, Chicago (where it won the Silver Hugo and audience award), AFI Fest and more. Sideshow and Janus Films plan a traditional theatrical release from November 24, followed by digital distribution on the Criterion Channel and a Criterion Collection DVD and Blu-ray.

US distribution is considered key for any serious campaign, but also an asset in the case of Drive My Car is Hamaguchi’s rising profile. He was awarded the Berlinale Silver Bear grand jury prize for Wheel Of Fortune And Fantasy earlier this year, a rare feat for a filmmaker to win acclaim in two top festivals back-to-back with two different titles.

Drive My Car — a 179-minute film adapted from Haruki Murakami’s short story about the emotional journey of a stage actor/director grieving over his lost wife — could find favour with voters. If the Japanese film is nominated for an Oscar, it would follow 2009 winner Departures by Yojiro Takita, and most recently Hirokazu Kore-eda’s Shoplifters in 2019.

South Korea has submitted Escape From Mogadishu, hoping to continue the momentum set by Bong Joon Ho’s Parasite with its four historic wins in 2020. Ryoo Seung-wan’s action blockbuster is set in the 1990s as civil war rages in Somalia, and is South Korea’s biggest film of 2021 — taking

around $30m at the box office. Well Go USA Entertainment, which distributed Better Days, scheduled a day-and-date theatrical release with South Korea in early August, banking on strong buzz from the home territory. The film is available on all US digital platforms, and a DVD and Blu-ray is due in January 2022.

Few Asia Pacific nations in recent years can claim Oscar track records as impressive as those of Japan and South Korea. However, back in 2001, Ang Lee’s Crouching Tiger, Hidden Dragon made history with 10 nominations — a record for a non-English-language film — and four wins. The period martial-arts feature remains Taiwan’s sole win in this category (then known as best foreign-language film). Two Taiwanese titles have since made the shortlist: Wei Te-Sheng’s Seediq Bale in 2012 and Chung Mong-Hong’s A Sun, which was supported by Netflix in the last Oscars.

Chung is representing Taiwan again this year with The Falls, a stormy family drama following the struggles of a high-school girl and her single mother who experiences mental illness during the pandemic lockdown. It is riding high as one of the most nominated films (11) for Taiwan’s Golden Horse Awards on November 27, after gaining traction in Venice’s Horizons section and Toronto’s Special Presentations. Sony Pictures Taiwan distributed The Falls in late October but no US release has yet been announced.

Better Days was the first Hong Kong film nominated for the Oscars’ best international feature film in almost three decades when it made the cut last season. This year the territory has picked Zero To Hero, an inspiring biopic of Paralympic sprinter So Wa Wai who, with the support of his mother, won six gold medals at the Paralympic Games over two decades. The local release in August was timely, after the Hong Kong team earned its record medal haul at the Tokyo Olympics. The Cantonese-language film went on to become the biggest local hit of the year, clocking up $3.5m. Netflix has pushed it along, releasing in North America in early November. Zero To Hero marks the solo directing debut of Jimmy Wan, who co-directed Lover’s Discourse and Lacuna with Better Days’ Derek Tsang.

Thailand, which has never made the shortlist, pins its hopes on The Medium, looking to defy conventional wisdom that supernatural films are a blind spot for the Oscars. The 130-minute Thai-language horror mockumentary chronicles a local shaman and her niece, who displays symptoms that suggest she might be the next medium in line.

The Thailand-South Korea collaboration is the brainchild of two genre specialists: The Wailing director Na Hong-jin produces for Thai filmmaker Banjong Pisanthanakun, who was behind several Thai breakout horrors including 2004’s Shutter (remade in the US by New Regency) and 2013’s Pee Mak, still the biggest Thai film of all time.

While it is not slated for a US theatrical release, The Medium has stirred up buzz since its mid-October launch on horror streaming service Shudder. Internationally it has been sold widely, including to English-speaking territories, Latin America, most of Asia and key European markets such as Germany, France and Spain. In South Korea, the film won the top prize at Bucheon International Fantastic Film Festival and took more than $7m at the box office in July. The Medium arrived in Thailand in late October as cinemas reopened after a six-month closure.

Elsewhere in Asia Pacific, Abdullah Mohammad Saad’s Rehana from Bangladesh and Kavich Neang’s White Building from Cambodia have both found US distribution. Grasshopper Film and Gravity Films acquired the former during Cannes when it premiered in Un Certain Regard as the first Bangladeshi film in the festival’s official selection; while KimStim picked up the latter, a Horizons prize winner for best actor at Venice that played in Chicago’s New Directors competition. The US releases of the two films, however, are dated 2022, after the announcement of the 15 shortlisted finalists on December 21.

Two more commercial successes join the race: Dad, I’m Sorry by Tran Thanh and Vu Ngoc Dang is Vietnam’s biggest local film of all time, taking $18m at home and more than $1m in the US (through 3388 Films). Meanwhile Zhang Yimou’s Cliff Walkers, which grossed $180m in China and was released by CMC Pictures in North America, is the ninth film by Zhang to have been submitted to the Oscars — three of which, Ju Dou (1991) and Hero (2003) representing China, and Raise The Red Lantern (1992) for Hong Kong, scored a nomination.

A string of festival favourites are also in the mix: Rotterdam Tiger Award winner Pebbles by India’s PS Vinothraj made its US premiere at the New Directors/New Films Festival in New York; Toronto prizewinner Yuni saw Indonesia’s Kamila Andini as the first filmmaker to be presented twice in the Canadian festival’s Platform competition; and Ru Hasanov’s The Island Within from Azerbaijan won the best director award at Sarajevo.

Two films disqualified in the last Oscar season were resubmitted: Pawo Choyning Dorji’s Lunana: A Yak In The Classroom from Bhutan won an audience award at Palm Springs; and Yalkin Tuychiev’s 2000 Songs Of Farida from Uzbekistan also premiered in Horizons.

A total of 19 submissions from Asia Pacific have been announced this year. Rounding out the list are Artykpai Suyundukov’s Shambala from Kyrgyzstan, Muzzamer Rahman’s Hail, Driver! from Malaysia, and Wayne Peng’s Precious Is The Night from Singapore.